Reaching Up, Reaching, In, Reaching Out 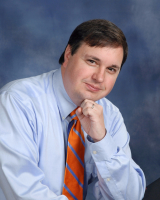 Pastor Hank Perry began his ministry at Midway UMC on June 19, 2016.  Hank was born in Toccoa,GA, and lived most of his childhood in Watkinsville, GA.  He graduated from Mercer University with a degree in Biomedical Engineering in 1997, and for a short time worked at Duke University as a research engineer.  It was there Hank felt called into ordained ministry.  He attended Duke Divinity School, graduating in 2002.  He was appointed to the  Rocky Ford charge in Screven County in 2002.  In 2003, he was moved to Richmond Hill UMC as their associate pastor after being requested by their senior pastor, Bill Strickland.  IT was in Richmond Hill that Hank met his wife, Amy, and they were married in 2006.  In 2008, they welcomed Mills into the family. Hank served there until 2010, when he was appointed to Trinity Chapel UMC on Tybee Island.   The Perrys served on Tybee until 2016, when they made the move to Midway UMC.

Amy teaches second grade at Savannah Christian Prepatory School, where Mills attends as well.  She is a graduate of Furman University with a degree in Christianity,  and Masters degree from Georgia State University in Education.  Amy grew up in Savannah while her father served as a pilot in the US Army.

Make sure to sign up for emails.  Go to the news page.

Food Pantry Ministry provides bags of groceries to those who need it most.